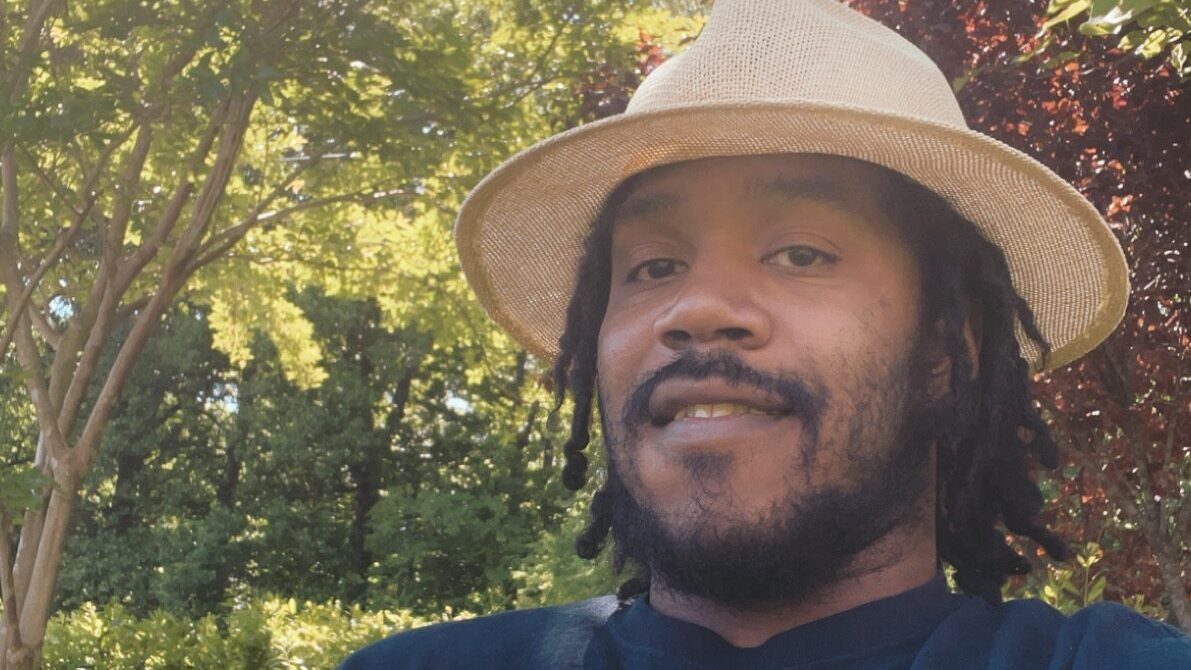 When we spoke to TJ recently, he had lived in his condo at 140 W. Franklin for just a month. And although he and his dog Phoenix were still settling in and getting unpacked, he already loved it there.

TJ is a self-described “product of Chapel Hill,” having grown up with his mom and two sisters at the Lakeview Mobile Home Park on Weaver Dairy Road. He says that happiness is about the people who surround you and not what you have, and he was always surrounded by a very supportive and loving community. And it’s because of his childhood experiences in Chapel Hill that his journey has brought him back to where he started, in the CHCCS district as a teacher for students with disabilities and a basketball coach.

TJ’s journey to becoming a teacher wasn’t necessarily a straight line. After spending some time at several different colleges, he took a break from school for nine years. As he describes it (with a laugh), he “took the extended route,” and he says he needed to refocus and go back to school when he really knew what he wanted to do. As it turns out, his calling found him.

In 2013, he was working three jobs, one of which was as an assistant coach at East Chapel Hill High. When the head coach there told him he had found him a spot as a teaching assistant in a self-contained exceptional children (EC) classroom at Estes Hills Elementary, he decided to take a “leap of faith” and give it a try. He worked with a great lead teacher who showed him the ropes, and as he watched and learned from her, he found her passion contagious — and he realized he had found his own passion, too.

He went back to school at UNC Wilmington, finished his degree, and came right back to Chapel Hill to get to work. He says he knew there were lots of places he could have gone, but this was the right place for him. “Chapel Hill schools are great, but there’s also an undercurrent that a lot of people overlook if you’re not really looking in the right place. I can see how easy it is for kids who look like me to be overlooked because there are not a lot of people like me doing this work in Chapel Hill. This work has opened my eyes to a lot of different things that are happening to young people, especially black and brown young men. I realize these kids have a real uphill battle.”

Now, TJ is an EC Resource teacher at Northside Elementary, and he also coaches basketball at Carrboro High. And as of this summer, he lives within walking distance of Northside and just five minutes’ drive from Carrboro.

TJ found out about Community Home Trust through friends. He had been looking for houses on and off for a while, but he was frustrated by the market and had work to do on his credit and savings. He was living with his sister and her family in Mebane, and although he had a 30 minute commute to work, he decided to put off his search for his own place until January 2022. All the same, he remained on the CHT waiting list.

Then in May of this year, he received an email about a condo that was available at 140 W. Franklin. It was just right for him — and he was amazed to learn from CHT Sales Manager Amy Slaughter that he was at the top of the waitlist. “I never thought I was capable of doing something like this,” says TJ. “It was surreal, really just like shock and awe. Considering where I grew up, we don’t make it up to Franklin Street to live.”

TJ credits his family, friends, and community for supporting him and helping him prepare to become a homeowner. “It was a conscious effort for over a year to make sure I did what I needed to do,” he says of his work to improve his credit score and pay down his student debt. “It was a village of people who supported me in what I was trying to do.” He also says that Amy made the process as simple as possible and couldn’t have been more encouraging and helpful. “She is a superhero for anybody who gets into this process! She does an amazing job of making you feel comfortable, and she doesn’t judge anything you are going through. She never makes you feel like you’re less than any other person she’s working with, and it just makes you feel like this is the place you want to be.”

TJ’s advice to anyone who hopes to become a CHT homeowner is to be patient. “Continue to do the things that are necessary,” he advises, “because your time is coming. And when you think it’s not going the way you want it to, that doesn’t mean it’s the end of the road. It’s a beautiful program for those who truly need it, and if you’re patient, you’ll see at the end of the road that you’ll find something that works just for you.”

If you want to help teachers like TJ purchase their first home this Affordable Housing Month, please make a donation today!