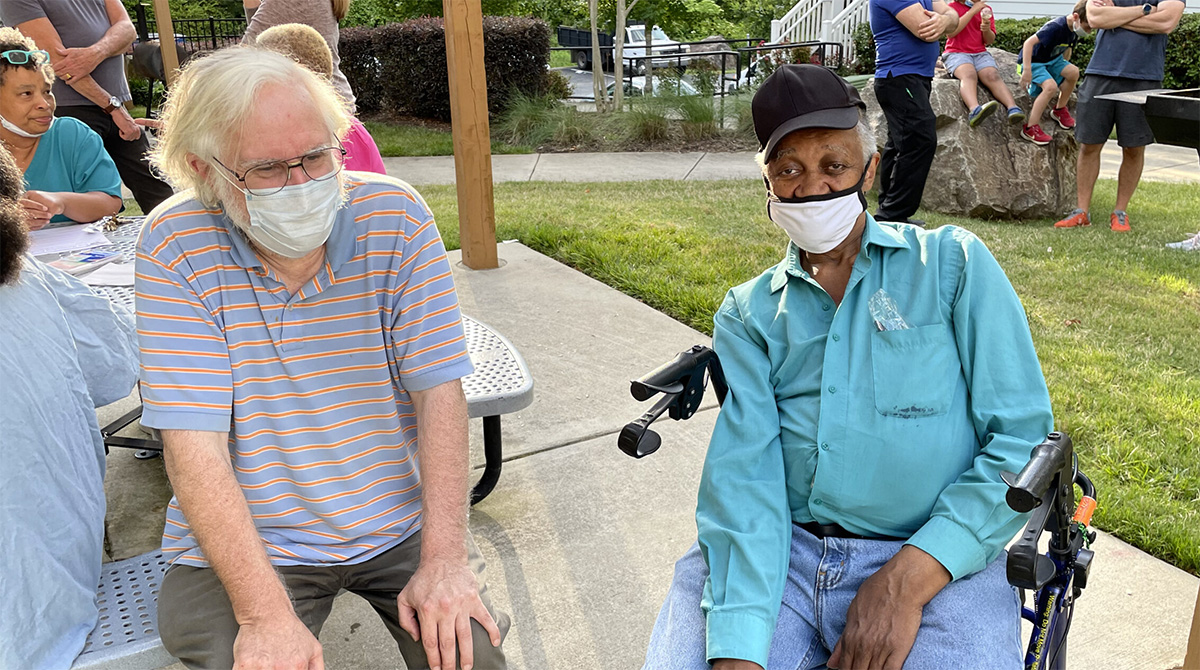 Pictured above: John (L) catches up with a Landings neighbor at the ice cream social this spring

John has lived in The Landings at Winmore, our 58-unit affordable rental complex in Carrboro, since 2011. In fact, he was one of the first people to move into his building when it was first built. But John is not only a Landings resident; he’s also an active member of the Tenant Advocacy Committee (TAC) and an advocate for permanently affordable housing.

John says that his journey to living at The Landings was a little bit unusual. He developed health issues shortly after earning a double major in English and German from UNC and a graduate degree from NC State. He taught English part-time for nine years at Wake Tech but eventually ended up on disability. “Initially I was not in a housing crunch as I was living in a duplex not far from Chapel Hill that my mother owned,” shares John. “But as she developed Alzheimer’s and it inevitably progressed, neither of us could keep the house up to date and it ultimately became pretty uninhabitable. I was doing advocacy in my spare time, and while serving on a legislative study commission, someone from Chapel Hill said a development was coming open soon and to look into applying.”

That hint led John to apply for a spot at The Landings where he was the first person on the waiting list. When another applicant was eliminated, he moved off the waiting list and into his new apartment. “I hadn’t requested handicapped accessibility because I knew it would limit my odds,” says John, “but ironically, I had a mild and quite unexpected stroke within months of moving in. Within a year my mother was in a nursing home. That chance tip was key to providing me housing security.”

John has contributed professionally to many different fields, including donating to a scholarship fund at NC State, helping write a chapter of a book on nursing during Hurricane Hugo, and being listed as a lead author on a paper on social work in the UK. “But especially since my stroke over a decade ago, I’ve tried to lead a quiet life with time for my hobbies,” says John. “My complex is very quiet. A stranger might find my apartment cluttered, but to me it is quite comforting.” All the same, he has remained active online, especially during the pandemic, and he says that many of his friends now are those he has met online through a course from Emory Divinity School. “Frankly much of this is possible because I have some security about a roof over my head, which is largely due to The Landings.”

As for advice for potential future tenants of The Landings, John says, “Be aware there are potentially a number of different subsidies and housing programs and be proactive in getting on relevant waiting lists. I think Community involvement like the TAC committee is a plus to try and stay more informed. There is also a Board for the community.”

‘Tis the Season — to Protect Your Pipes from Freezing!